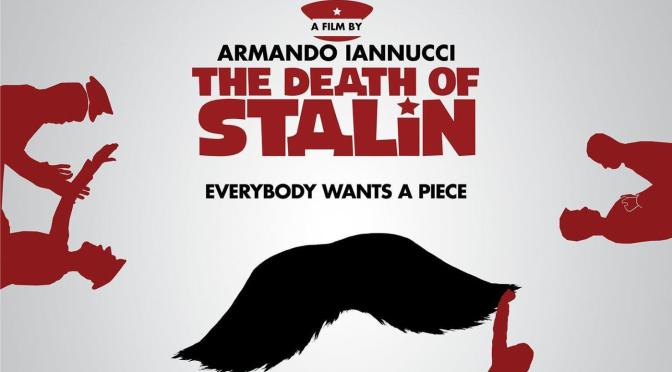 Russia’s Culture Ministry has banned the film The Death of Stalin from theaters across the nation, just days ahead of its release.

But what is The Death of Stalin, and what makes it such a controversial piece? Well, as you’d expect, the film takes place in the USSR, at the time when the infamous Soviet leader passes away. To set the scene, the year is 1953, and the communist powerhouse is left without a head of state. The country is left deep within the voids of a power struggle, and the higher-up officials/comrades of Stalin scramble to usurp his throne. The movie is a political satire, and in the same vein of “Er Ist Wieder Da” (Look Who’s Back), the 2015 German shock-humor comedy in which Hitler wakes up in modern day Berlin. The Death of Stalin shares a similar style of one-liners and mockery.

The Death of Stalin features quite a famous roll call, including renown icons such as Steve Buscemi, Jason Isaacs, Jeffrey Tambor and more. The cast ended up being a hit with the crowds, but unfortunately for director Armando Iannucci, Russian representatives didn’t share the same reaction.

Though released in the UK back in October, the film had its Russian screening on Monday. It featured attendance by various members of Russian parliament alongside leading figures of Russian cinema. That group didn’t enjoy what they witnessed unfold on the theater screen.

The deputy head of parliament ‘culture committee’ spoke to local news sources expressing her disdain towards the film. She stated “I have never seen anything so disgusting in my life.” Also on her side stands Yury Polyakov. As a member on the culture ministry’s advisory council, he said that the movie contained aspects of “ideological warfare and extremism.”

To make matters worse, February is the anniversary of Soviet/Russian victory at the bloody Battle of Stalingrad back in 1943. Stalingrad was one of the largest (and most gruesome) battles in all military history, and marked a victorious turning point against Nazi Germany. Leading Soviet forces was the great strategist Georgy Zhukov, who makes an appearance in the comedy.

An open letter was sent to Vladimir Medinsky, Russia’s culture minister, in which 21 different signatories came together to complain about the film. One of those twenty-one people happens to be the daughter of the great Marshal Zhukov. The letter slammed the film for “parodying the history of the country and denigrating the memory of Russian citizens who fought the Nazis.” Not only do they believe that the movie insults the Russian people, but they also feel that the USSR national anthem was used inappropriately.

Medinsky soon made a public response to the controversy. He stated “Many people of the older generation, and not only, will regard it as an insulting mockery of all the Soviet past, of the country that defeated fascism and of ordinary people, and what’s even worse, even the victims of Stalinism.” He continued, mentioning “We don’t have censorship. We are not afraid of critical and unpleasant assessments of our history.”

However, the movie had its film distribution certificate withdrawn, which effectively cancels the planned Thursday release. Despite this, director of The Death of Stalin is adamant that his work could still be featured in Russian theaters, and that representative reactions don’t reflect the general public. In an interview with the Guardian, he mentions “All of the Russians we’ve shown the film to so far, including Russian press, have said how much they enjoyed and appreciated the film.”