When you think of countries that are well known or notorious for their excessive alcohol use, the first one that comes to mind is Ireland. Right behind them would more than likely be Scotland, and interestingly but also luckily they plan on starting to try to kick this habit as it is growing into a major problem for the country as a whole. The leaders of the country do not like the “unhealthy” relationship with alcohol that they have and explain that drinking is seen as a joke or something to be proud of there, and believe that it is a bigger problem than most think and believe that something needs to be done about it soon as it shouldn’t stay that way much longer. So what has or what will the land of whiskey do to begin to kick this problem?

First, they have established a new law and have become the first country to impose minimum prices on alcohol. They hope that this first step will bring down levels of drinking of the Scottish people and will also bring down the number of people drinking as a whole there. In 2016 more than a quarter of Scottish people were reported to be drinking at a “hazardous level”. That same year there were also 1,265 alcohol related deaths reported, up 10 percent from the previous report in 2015. According to the World Health Organization data, on average the Scottish people’s alcohol consumption is among the highest in the world. They consume the equivalent of more than 13 liters or 3.4 gallons of pure alcohol a year, 40 percent more than Americans. They have already taken some precautions before, an example being banning happy-hour promotions in 2009. They are now taking it more seriously than then though as it is becoming more and more of a public health issue, also beginning to take aim at other market things like cheap prices and multipack deals hoping to help aid the problem. 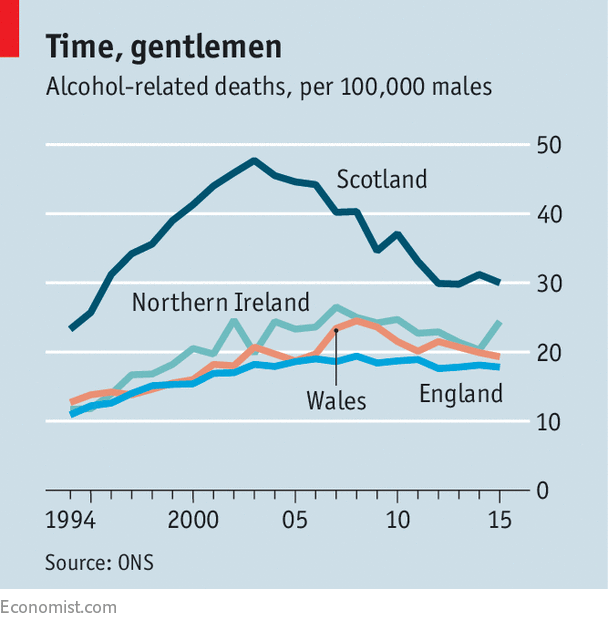 It is going to more than likely be pretty difficult task for the Scottish people as it is seen as a “joke”, but not all necessarily see it as a joke. A lot of people in both Scotland and Ireland both see drinking and alcohol as a cultural thing, it is historical for the countries and their heritage. So not only is it difficult to stop excessive drinking in general, but also to detach or at least loosen that state of mind and idea from the country. As a whole it is seen as an integral part of life, and realistically it would stay that way for much longer if it was not for the alcohol related diseases and deaths. How effective do you think these new restrictions will be? And are they a good idea?