Season 7 of Fortnite is here, and it is huge!  They added so much stuff from new additions to the map, to vehicles, to gun camos. Say goodbye to Flush Factory and Greasy Grove. That area of the map has been completely covered by snow and ice.  Those areas of the map have been replaced by 3 new named locations named Happy Hamlet, Frosty Flights, and a crowd favorite Polar Peaks. 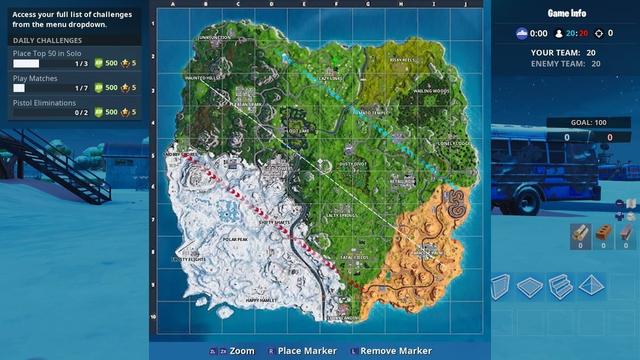 The reason that Polar Peaks is so popular is because in the middle of Polar Peak there is a sword that you can pick up and works a little like the fist of Thanos that the game introduced earlier in the game.  Another big thing that was added to the game was airplanes. People can now get into airplanes and fly them around. Airplanes can hold up to 4 passengers and the pilot. The planes will fly through anything and they come equipped with a gun on the front of the plane.  You can also shoot from the plane if you are a passenger, also if you get shot down you automatically deploy your parachute and glide down to safety.

Another thing they added throughout the map is ziplines. Connecting mountains together allowing for easy travel to and from mountain tops.  The only downfall to these ziplines is that there is a bug that makes you randomly fall and take fall damage. Fortnite is working on fixing the bug and are expected to have it fixed by the next game update. Of course with the new season that means there is a new battle pass. The Season 7 Battle Pass offers something never before seen in the game before.  It brought camos for your guns and even vehicles. You can now put a camo on your quad crasher, pistol, assault rifle, shotgun, and sub machine gun. One of the biggest things added to the game was the creative mode. Players can now go into creative mode and create their own map, or they can go and play other maps built by other players around the world. There is a contest going on in fortnite creative mode as well, the player that creates the best map will have that map that was built put in the place of Risky Reels.  So keep your eyes peeled for another new map change in the near future!