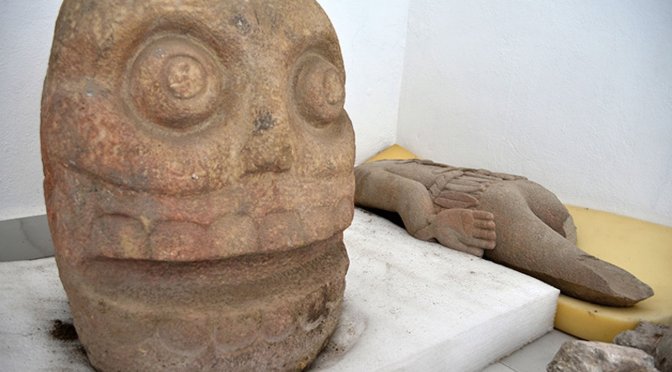 Last week in an unprecedented discovery, archaeologists made a huge breakthrough learning more about pre-colonized America. Subject matter was macabre and lived up old clichés such as sacrifices, skinning humans, volcanic rock sculptures and more.

The remarkable finding was uncovered by Mexico’s National Institute of Anthropology and History (INAH). The elite organization announced that the temple was stumbled upon during one of their latest expeditions of Popoloca Indian ruins scattered across the central state of Puebla.

Workers at the institute were surprised to find a shady temple right under their noses, near Ndachjian-Tehuacán. Through a secret tunnel a revelation came, and excavators found the haunting chamber to belong to the very important pre-hispanic deity Xipe Tótec. Two different ‘skull-shaped’ stone carvings, alongside a stone trunk, depicted the ‘flayed God.’

Each of the skulls stand roughly 2.3 feet high, and weigh a hefty 440 lbs. Both are carved from volcanic stone, and marked by cuts which represent ‘skinning’ according to researchers. The trunk is also approximately 2.6 feet tall and has an empty hole which historians agree that it once displayed a ceremonial green stone.

Ancient accounts that have been previously discovered suggest that various victims were killed in a ‘gladiator-style’ combat or shot by arrow until immobile on one central platform. Then, they were moved and skinned on another. The layout of the unveiled Tehuacan temple seems to match that description perfectly, and further supports those past reports.

The ancient peoples of Popoloca celebrated the god with a festival titled Tlacaxipehualiztli, which roughly translates from Nahuatl to “the skinning/flaying of men.” The folklore and tales of the deity are also interesting. Myths spoke of Xipe Tótec flaying pieces of himself and scattering his shed skin across the entire Earth every spring, as to replenish the ground with vital nutrients for new life and vegetation. His followers soon came to symbolize rebirth and the renewal/change of seasons with the skinning of their fellow man.

It’s been said that the temple complex was constructed between 1000-1260 A.D. by the Popolocas before they were conquered by the Aztecs. Xipe Tótec is one of the more famous and earliest known pre-Hispanic deities, and he wasn’t just followed by the Popolocas. He stood as a very prominent religious figure, being worshipped by many cultures through Mesoamerica all the way until the Spanish conquest and colonization of the New World.

Susan Gillespie, a University of Florida archaeologist who wasn’t involved with the project, wrote on the discovery. She stated “finding the torso fragment of a human wearing the flayed skin of a sacrificial victim in situ is perhaps the most compelling evidence of the association of this practice and related deity to a particular temple, more so to me than the two sculpted skeletal crania.”

She continued, saying “The Aztec practice was to perform the sacrificial death in one or more places, but to ritually store the skins in another, after they had been worn by living humans for some days. So it could be that this is the temple where they were kept, making it all the more sacred.”