Social Network has opened a window of opportunities for everyone who uses it. Now that we have social media it is as easy as a swipe of a finger to get a hold of a long lost friend, plan a birthday, and finish 24 levels of Peggle Blast, all in one sitting! But there is quite a lot of negative activities occurring thanks to the internet.

One of the biggest things it has affected is bullying. Social network has taken bullying to the extreme. Cyber bullying is one of the worst things brought forth by the web, and is only shown to be getting worse. Growing up most people have had their run in with the typical bully. They make smart comments, maybe call you a few names. The cyber bully has more power than a regular ordinary kid picking on someone on the school bus. The cyber bully is in the shadows. They can attack someone to the point where the victim does not feel safe enough to tell anyone. Since the incident happens over the internet whether its direct private messaging or on a public post, most of the time it will go undetected. the cyber bully is a matter that needs to be dealt with before it spirals completely out of control. 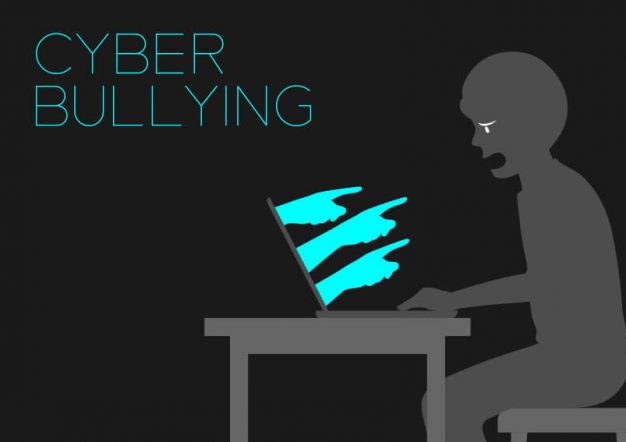 People say bullies feel the need to attack others to make themselves feel more powerful, to boost their own egos, and of course bring others down (stopbullying.gov). But nobody seems to focus on ways to make that person not feel the desire to bully, and see the wrong in their actions. On a poll of 60 high school students from West Clermont high school, The Great Oaks, and other local school districts, students were asked “What would you do if you witnessed or came across someone being cyber bullied?”

11 students voted- Ignore it, it is none of my business.

From this chart we can conclude that high schoolers today in our area are displaying some right decisions, but they veer away from telling an adult or authority. Telling an adult or authority should always be a number one decision. Adults will most likely hand the situation in a calm and peaceful fashion. Which is the best way a dispute of the sort should be dealt with. The second two best decisions would be to ignore and block the bully. But in some cases doing so could influence the victim behavior and mental state. It would be the same as ignoring someone who is in need of help when being bullied in the halls. Over half of the students voted that they would ignore the situation. And the last 30% of the students in the poll voted that they would retaliate against the bully, and attack them back. Even though this is a possible technique to teach the cyber bully a lesson. It also gives them the attention they are seeking and is giving them exactly what they are looking for.

The second high school student poll shows 56% of 90 people claimed that they feel cyber bullying is an ongoing problem at their school, and the 44% rest feel as if it’s not such a problem right now at their locations. The last poll taken was out of 73 people. 93% of them voted that their school does not take any tabs or display punishment when they come across an act of cyber bullying. The other 7% voted that they feel as if their school does display punishment to kids cyber bullying. Country wide only 1 out of every 10 teen victims report the incident to an adult.

(Dosomething.org) From this data it can be concluded that students are facing cyber bullies in not all of the right ways. Students need to tell adults, and authority more often when they come across someone being cyber bullied. And they should continue to block, and ignore the bullies after telling an authority. To keep them from having the negative attention they are asking for. We also can determine that our schools need to take cyber bullying more seriously, and maybe keep tabs on their students’ social media accounts and influence them to come to an adult when faced with cyber bullying. When a cyber bully is caught they should be faced with the same punishment one would if they were bullying to someone’s face. Some might argue that dealing with a bully over the internet is out of their hands. But students, teachers, parents and even strangers can help even a little to stop a bully.

Therefore cyber bullying should be taken more seriously in our local schools and areas. 42% of this bullying takes place on the social media app Instagram(dosomething.org). And young people who are victims of this bullying are more at risk for self harm and suicidal behaviors, than someone who isn’t a victim of it. Kids should be able to live life away from bullying and harassment and if we all stand against it the bullying stigma will slowly but surely die away.