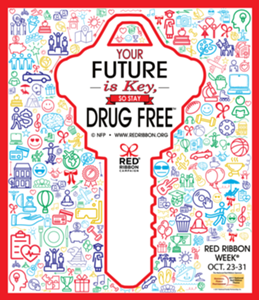 Red Ribbon Week began after the murder of DEA agent Enrique “Kiki” Camarena who was kidnapped and tortured in 1985. They also kidnapped his pilot Alfredo Zavala-Avelar. Camarena had been working undercover for 4 years in Guadalajara, Mexico. His works led to the discovery of a multi-million dollar narcotics operation in Chihuahua, Mexico. After the men were found dead, friends and neighbors began to wear red ribbons in his honor. The ribbon symbolizes prevention of drug use in order to reduce the demand of illegal drugs. When he wanted to join the Drug Enforcement Administration his mother tried to talk him out of it but he said, “I’m only one person but I want to make a difference.”

The Red Ribbon campaign was originally a National Family Partnership, previously known as the National Federation of Parents for Drug Free Youth. Parents became sick of the problems drugs and alcohol can cause so they began to form coalitions. Some of these groups used KiKi as their model and inspiration, using his belief that one person can make a difference.

Today, the NFP is a national leader in drug education and prevention. Their mission is to lead and support our nation to nurture and raise our youth to be healthy and drug free. Their work is recognized through their growing number of nearly 100 partners including parent committees, PTO groups, and local coalitions. Parents, youth, and others share as much information and ideas as they can. They will continue to build their groups and be a national voice for others.

There are activities that you can take part of going on for students for this week. Students can enter the Red Ribbon Photo Contest with a chance to win $1,000 for your school and an iPad for you and your family. You can attempt to create the 2018 Red Ribbon Theme with a chance to win $500 of merchandise for your school and National Recognition. The creator of the theme for this year was a student at Solon Middle School in Solon, Ohio. Parents can also enter these contests provided for students as well as use this opportunity to educate your children on the effects of drugs.

Red Ribbon Week was started to honor the bravery of Enrique Camarena and raise drug awareness. Camarena wanted to make a difference in the world and even though he isn’t around to witness it anymore he has proven that one person can make a difference.